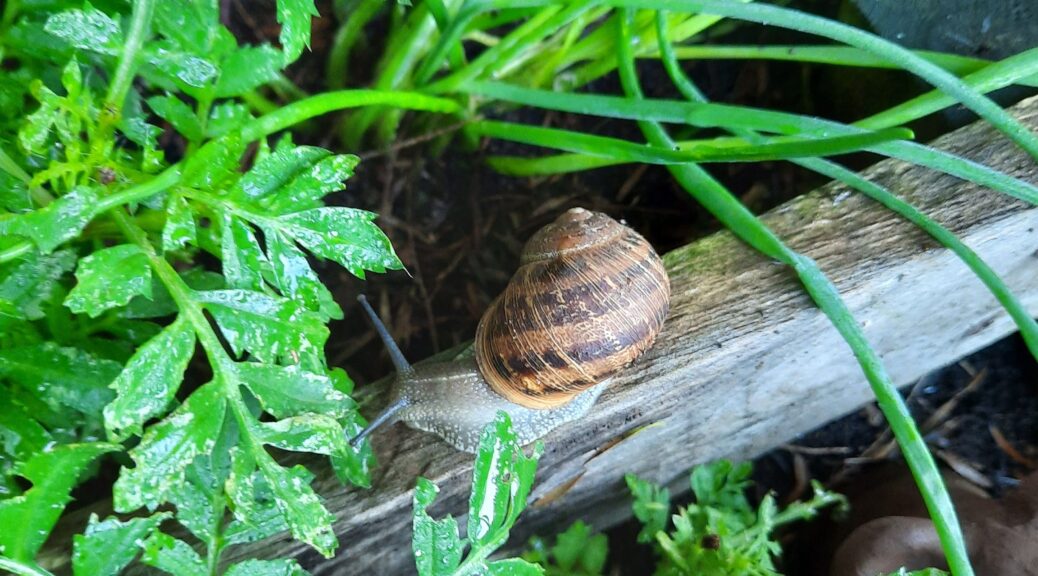 I have yet to meet a gardener who doesn’t bemoan the slugs and snails eating their plants. If you feel discouraged when newly planted seedlings are chomped overnight believe me, you are not alone. Do beer, egg shells and copper really work in deterring them? I put some of these methods to the test and share my findings and experiences about what to do to combat slugs and snails in your garden.

I have a confession. I’ve killed many snails and slugs. I’m not particularly proud of it. I vindicate myself by saying that I am a warrior for my plants. It still bothers me though and perhaps that is why I have so many snail ornaments in my garden. A tribute to the fallen one could say. So before you judge me consider whether you have ever swatted a fly, squished an ant or exterminated a mosquito.

Before we look at what to do about them, let’s first see what types of slugs and snails can be found lurking around under the plants.

Types of slugs and snails

A snail that is widespread and a common sight in South African gardens is the brown garden snail (Cornu aspersum). These snails originate from the UK, Western Europe and the Mediterranean areas. Young snail’s shells usually grow to about three to four centimetres in size by the time they are adults. The brown garden snail feeds on a wide variety of plants and vegetables. These snails are eaten as a delicacy in France but here they think my garden is a delicacy. Hors d’oeuvres for anyone?

Cochlicella barbara or small pointed snail is also a snail species that has found its way from Europe to South African gardens. They are mostly found in coastal areas and sandy habitats. Because these are tiny snails of only about a centimetre in length, their eggs are very small and can easily go unnoticed resulting in their numbers increasing dramatically.

The third type of snail that is often found in South African gardens is the white garden snail, also called a Dune snail (Theba pisana). This is also a European snail which has now become problematic in a number of countries. The white garden snail is smaller than the brown garden snail and has a creamy white shell with light to dark brown lines. The ones found in my garden fortunately don’t know about my veggies in the backyard and so far are confined to the front garden only.

There are a number of slugs in the genus Deroceras that go by the common name of grey field slug. I’m not sure which species is living in my garden but I do know that these guys cause quite a bit of damage to my plants and veggies.

One thing I really don’t like is the use of chemicals and poisons in my garden. In fact they are banned when it comes to my veggie garden. I prefer to keep things organic. So one way of dealing with slugs and snails in my garden is with beer. I find this method to be very effective against slugs. Slugs love beer. Snails perhaps, not as much.

All you’ll need to make a slug pub beer trap is beer and a container in which to put it. The bottom section of a cooldrink bottle works well. Any beer can be used. I buy the cheapest which is usually available in a quart. Pour the beer into the container and place it among the plants.

The slugs are apparently attracted to the yeasty smell of beer and just cannot resist the temptation. The next morning on inspecting the slug pubs I found that the beer had done its work most effectively.

A good old fashion slug hunt at night is a highly effective way of ridding your garden of these slimy molluscs. Slugs and snails are most active at night and I am always very surprised to see just how many of them are out and about at that time. The garden life at night is quite different to during the day so one may even find a few other culprits like cutworms eating the plants. This method is probably not for the very squeamish because once you have a bucket of slugs and snails you’ll need to dispose of them.

I’ve used crushed egg shells in my garden to protect my seedlings in the hope of keeping them safe from snails. But do they really work?

Something was still eating my plants. I couldn’t find any caterpillars. Perhaps the egg shells were too sparsely scattered. Or they were not fine enough. Or maybe they were not as an effective a barrier as I was lead to believe. It was time to test the theory.

A resident brown garden snail was volunteered for the task. I placed freshly crushed egg shells in a five centimetre wide band around a young parsley plant. The snail was carefully positioned on the outside of the ring of egg shells. Would it cross or would it not?

After a few moments the snail made a beeline right across the crushed shells to the parsley. Nooo! That was not supposed to happen. I tried it again. Same thing. The snail went for the parsley and totally ignored the egg shells.

My conclusion is that egg shells may only be good at giving calcium back to the soil, but certainly not good at deterring snails. Snails 1, plants nil.

Some people vouch for copper strips to keep these pesky molluscs from their plants. Copper is quite pricey. I figured that before I spent a lot of money on copper tape I wanted to know just how effective it was. So I set up an experiment to test the theory.

The hardware store only sold what they called an earthing strip. A flat strip of copper about 1.2 cm wide with small holes punched down the centre. I bought a meter and headed home to begin the experiment. I fastened the copper along the edge of one of my wooden planter boxes where some juicy young lettuce plants are growing.

It was easy enough to find a volunteer. I placed the snail on the side of the planter box a few centimetres from the top and watched what it did. The snail slowly started slithering upwards and peered over the edge looking longingly at the succulent leaves beyond. (Well, I imagine it must have been looking longingly. I would have if I were a snail.) It touched the copper strip a few times and then retreated, turning around and sliding away.

I repeated this test a few times and each time the snail decided to back track. My conclusion is that the copper tape really does work. The science behind this is that the copper reacts with the snail’s slime causing a harmless shock which deters the snail from crossing the tape. Plants 1, snails nil.

Some fun facts you may not have known about snails

So maybe once I have found a way to snail-proof my veggies using copper tape, I won’t need to add any more snail statues to my garden.

What methods do you use for dealing with slugs and snails in your garden? Please feel free to share in the comment section below.

Until next time, watch out for those snails!

It’s tea time – Teas that can benefit your garden
For centuries tea has been drunk for enjoyment, for comfort, for convalescence …
A No-Lawn Garden Makeover
The concept of a no-lawn garden is an idea that has been …
Cape Gooseberry Jam
This is an easy-to-make jam with a delicious sweetish-tart flavour. These little …
Lemon and Yogurt Cake
Winter in the Cape is lemon time. We are in the midst …