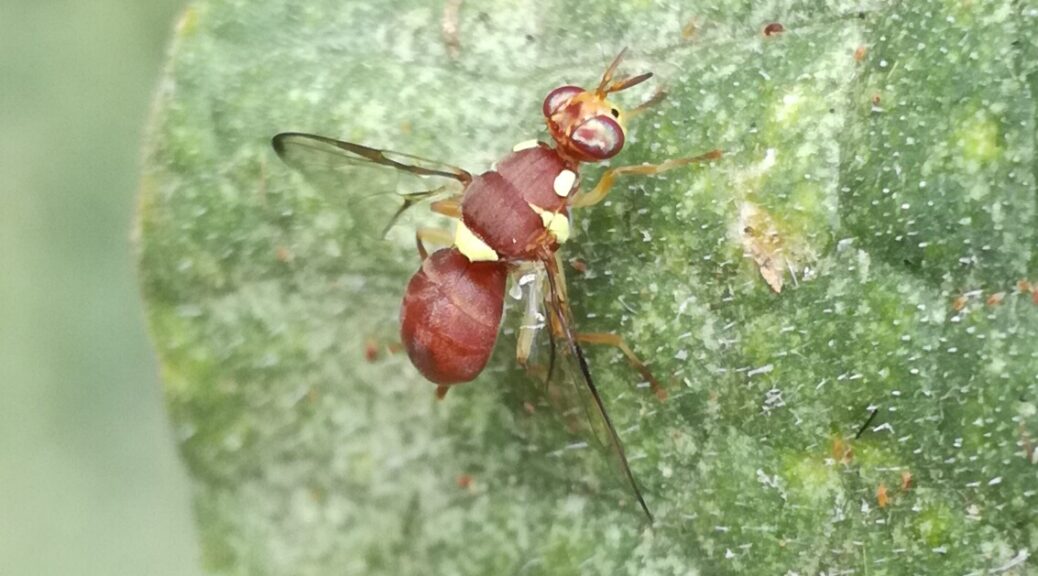 Pumpkin flies are a cause for much heartache and despair amongst farmers and veggie gardeners alike. Often mistaken for a wasp, these deceivingly attractive-looking flies can destroy a crop of squash if left unchecked. In this blog I share my experience in tackling this pesky pest.

What are Pumpkin flies?

Pumpkin flies, or lesser cucurbit flies, are similar to fruit flies. Although, as their name suggests, they have a particular liking for cucurbits. And believe me, it’s not just pumpkins. These flies will lay their eggs in any of the gourd family. This includes gem squash, butternuts, spaghetti squash, cucumbers, cantaloupe, watermelons and zucchinis.

They can be identified by their coppery-coloured bodies and yellow markings. The flies have a single pair of clear wings with darker markings around the edge. The first time I spotted one of these in my garden I thought I was looking at a pretty little wasp. I was quite happy to have this visitor in my garden until I found out what it was and what it was capable of.

Just how damaging are they?

The female pumpkin fly lays her eggs in the young and tender fruit. Initially one may notice just a drop of juice on the skin but after a while a blemish appears where the fruit was stung.

Once the eggs hatch the maggots feed on the host plant causing it to rot. They’ll typically chomp away for about a week before they are ready for the next stage of their development.

It’s not long before they are big enough to emerge from the host plant and drop to the ground. The larvae bury themselves in the soil where they pupate. After two weeks they will emerge as adult pumpkin flies and the cycle will repeat itself.

As you can imagine their numbers can grow exponentially during the course of a season. So to answer the question of just how damaging they are, I would say – very.

Steps to take in combating the pumpkin fly

After losing so many squash and baby butternuts to this pesky pest I learned the following steps can be taken in tackling pumpkin flies.

Good housekeeping (or should that be gardenkeeping?) is vital. Remove stung fruit from the vine before the maggots have a chance to eat their way out of their host. Throw the infected fruit in the rubbish bin and not into the compost. You don’t want them breeding anywhere near your garden.

Try growing your crops early in the season when the pumpkin flies are not yet at their peak.

One method of tackling these pesky pumpkin flies which has provided some success is a trap using a protein bait to lure the female fly. I purchased the McPhail traps from Livingseeds and hang them, as recommended, about 30 – 40 cm above the ground in the leaves of the squash and butternut plants.

It works on the principle that the female is attracted to the bait and enters the trap through the opening in the base. Once inside she cannot escape. It is not foolproof but has helped in keeping the numbers of this pest down in my garden.

Gardening groups on social media have also recommended using Bioneem on the young fruit. This apparently deters the pumpkin fly from laying its eggs. I may look to this organic product for some added assistance should the need arise.

I have also heard of a gardener who covered each of her little plant babies in an organza bag. Not sure what the outcome was though as this would keep pollinators at bay. Which ever method you use to combat pumpkin fly in your garden, I wish you much success.

Did you find this article interesting? If so, please share it with your friends.

Cape Gooseberry Jam
This is an easy-to-make jam with a delicious sweetish-tart flavour. These little …
Lemon and Yogurt Cake
Winter in the Cape is lemon time. We are in the midst …
What to do about slugs and snails in your garden
I have yet to meet a gardener who doesn't bemoan the slugs …
The birds in my garden – Mousebirds
It is encouraging to see the different bird species that have made …
Comments are closed.