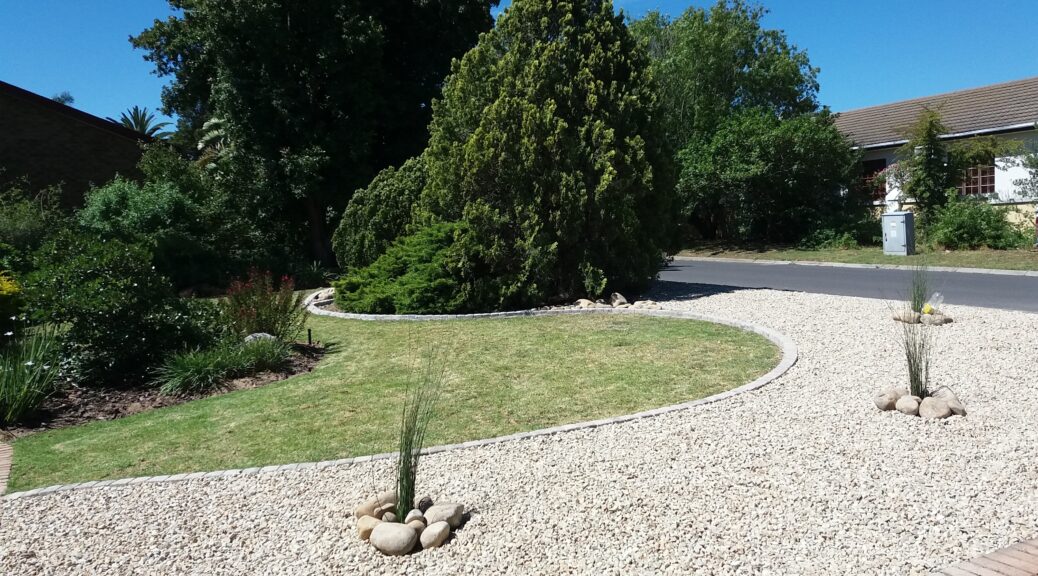 The journey of the garden makeover continues. The drought had played a pivotal role in our decision to redesign our garden to include hard landscaping. In Part 1 of the story I shared details about the design and preparation work done thus far.

The excitement was in the air on that November morning because it was the day that the exposed aggregate would be exposed.

The retarding solution sprayed onto the cement had prevented the top layer from drying overnight. It was surprising to see just how much traffic moves through our garden at night. There were plenty of kitty paw prints from the neighbours’ cats crisscrossing the pathway.

The Imprint Paving Solution’s team arrived and it was time for the magic to start. Using a hose to spray the pathway and brooms to scrub off the top layer of cement, the exposed aggregate was revealed.

We couldn’t use tap water for this exercise due to the severe water restrictions in place. It had rained a few days earlier so we thanked our lucky stars that our water tanks were full. We had 3000 litres to spare. Fortunately this turned out to be enough to clean the fifty-odd square meters of pathway. There was even enough to give the plants along the walkway, which were covered in cement splashes, a wash too.

I was delighted with the results and happy with the progress of the garden makeover.

Time to get planting

The three Leopard trees were first placed in position and then the smaller plants arranged around them. Satisfied that everything was in the right place, the planting could begin. The Coleus neochilus, or smelly spur flower, makes a great groundcover and was planted around the circle at the end of the path. The remaining plants were dotted around the Leopard trees.

Leopard trees have a very sparse canopy so there will be plenty of light for the sun-loving plants.

Work also began on the new veggie garden. We had a cement bird bath in the front garden. However, hidden by bushes, it was not of much use there. So after a lot of effort the rather heavy cement bird bath was placed in its new spot in the centre of the veg garden. Hubby of course helped with all the heavy lifting as well as laying of some spare pavers we had.

Lavender is one of my favourite flowers. I am particularly fond of the French lavender, Lavandula dentata. I decided to plant a border of lavender along the front of my veggie garden. As opposed to the river boulders around the Wendy house, it would add a soft touch to the hard landscaping.

My new veggie garden was like a blank canvas. A clean slate for me to grow the veggies we enjoy eating as well as experimenting with some new varieties. My first plantings included squash, beetroot, spinach and a number of herbs. I look forward to sharing more about the veggie garden’s story with you in future articles.

Looking at the scene before us it is so pleasing to see the magical transformation that had taken place. In just a short space of time the garden had gone from a weed-filled, neglected space to a beautiful, welcoming area.

The garden makeover is one of the best wedding anniversary gifts hubby and I have enjoyed over the years. With our next anniversary not too far away, I wonder what we should do regarding a gift?

Feel free to share your garden makeover experiences in the comments section below.

How to make Pickled Beetroot
As this year rapidly draws to a close and I reflect on …
It’s tea time – Teas that can benefit your garden
For centuries tea has been drunk for enjoyment, for comfort, for convalescence …
A No-Lawn Garden Makeover
The concept of a no-lawn garden is an idea that has been …
Cape Gooseberry Jam
This is an easy-to-make jam with a delicious sweetish-tart flavour. These little …
Lemon and Yogurt Cake
Winter in the Cape is lemon time. We are in the midst …
What to do about slugs and snails in your garden
I have yet to meet a gardener who doesn't bemoan the slugs …
The birds in my garden – Mousebirds
It is encouraging to see the different bird species that have made …
Making Lilly Pilly Jam
Not all berries that are edible are necessarily to be found in …
How to grow Butternuts
Whether you know them as butternut squash or butternut pumpkin, butternuts are …
Tackling Pesky Pumpkin Flies
Pumpkin flies are a cause for much heartache and despair amongst farmers …
10 Healing Herbs – healthy for you, healthy for your garden
For centuries herbs have been used in remedies, tinctures, oils and more …
Let’s see what’s growing in the veggie garden this Spring
Back in August the social media gardening groups were abuzz with comments …
Attention Ladybirds! The Aphids are this way
My heart just sinks when I see aphids on my plants. I …
Garden Project #4 – Part 1 of the Garden Makeover
We were in the grips of the worst drought Cape Town had …
Delicious Broad Bean Dip Recipe from Homegrown Beans
Harvesting something from the veggie garden is a very satisfying feeling. After …
The Wormery – Creating Super Compost
I never knew the unassuming earthworm plays an such an immensely important …
Garden Project #3 – Planter Box Veggie Garden
Veggie gardens come in all shapes and sizes. The design options are …
Spiders in my Garden
Spideroo, Spidora or "That Spider" – whichever name they go by, love …
An Introduction to Companion Planting
Just as humans get along with some neighbours better than with others, …
Garden Art Project – How to make Cement Spirals
Making DIY arts and crafts for the garden is a very trendy …
Comments are closed.