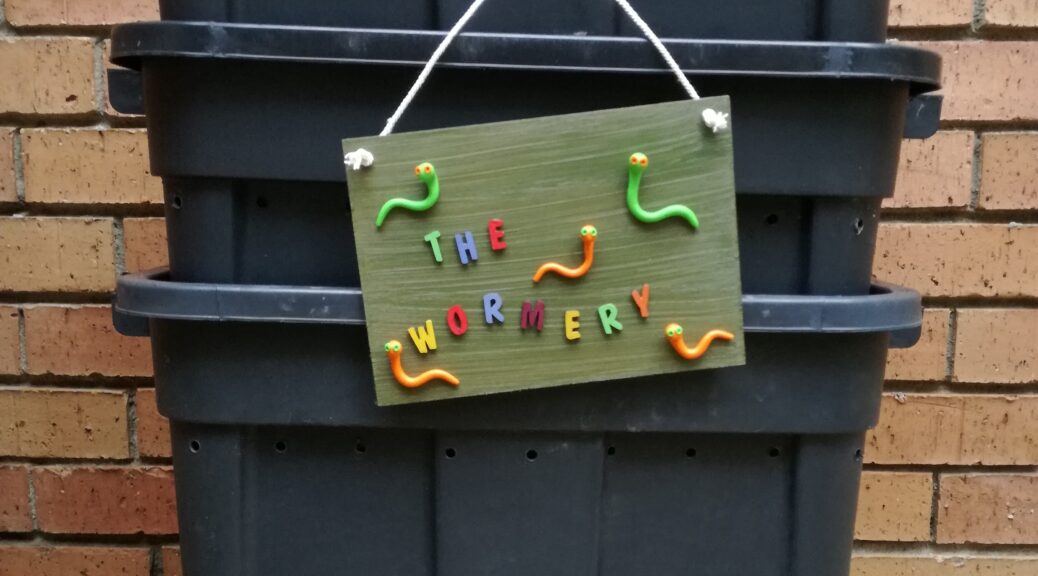 I never knew the unassuming earthworm plays an such an immensely important role in the garden until I heard about wormeries. These little guys really are the superheroes of the soil. Their mission in life is to replenish the ground with nutrients which they do by consuming organic waste and turning it into highly rich humus. Making your own wormery means your earthworms will be creating super compost for your garden.

If you’ve heard someone speaking about worm farming then the chances are you’ve heard the terms vermicompost, vermicast or worm castings, leachate and worm tea. But what do all these terms mean?

The vermicompost is the gold you are after. It is the nutrient-rich compost produced by the earthworms. Vermicompost contains much higher levels of nitrogen, phosphorus and potassium than most other composts. These nutrients are vital for chlorophyll production, root growth and healthy flowers and fruit.

Vermicast or worm castings, well, to put it plainly, is worm poo. The earthworms’ digestive systems have the ability to concentrate the nutrients in the organic material they eat. Their worm castings greatly enhance the soil creating a super compost which includes calcium, phosphates, magnesium and numerous trace elements.

Leachate is the liquid that has drained from the wormery and decomposing material. Because this liquid is not all worm wee, it may contain some pathogens. It is recommended not to use this liquid on edibles but rather on your ornamental flowers and shrubs which will still benefit from these nutrients. If there is too much leachate seeping from the worm farm it could be an indication that the wormery is too wet. Add some dry material like dried leaves or shredded newspaper to absorb the excess moisture and add fewer kitchen scraps.

Worm tea is the precious liquid that can be made by soaking a handful of vermicompost in a bucket of water for 24 to 48 hours. The tea can then be used as a liquid fertiliser mixed in your watering can at a ratio of 1:1.

Which worms would work?

The red wiggler worm (Eisenia fetida) is the hero in this story. Red wigglers are a special type of earthworm. They are best suited to the task of transforming kitchen scraps into super compost in a wormery.

There are a few thousand different species of earthworms in the world, however, only a few types are suitable to live in a worm farm. The wormery worms are top feeders compared to the worms in the ground which are burrowers. That is why digging up some earthworms from your garden to inhabit your wormery won’t work.

Finding suitable accommodation for your worms is really budget dependent. Ready-made wormeries are available on the market at a range of prices but one can of course build your own DIY worm farm for much less. The worms need a dark, moist environment in which to live so the container used should ideally be black, have drainage holes and sufficient air circulation for them.

The simplest form of wormery could be a black bucket that has holes drilled in it for drainage and a container underneath it to catch the leachate. I decided to spoil my worms and give them a little bit more of a luxury dwelling.

My wormery consists of three containers. The bottom container is to catch any leachate which I could drain off using the tap. The worms live in the “penthouse”. My idea was that once it was full, I could swap the top container with the middle one. My hope was that the worms would then migrate back to the top bin to find their food. It didn’t quite work that way and I had to hand pick the worms out of the vermicompost and place them in the top container. From experience I’d say one could quite easily build a two tier wormery for them.

Aeration holes need to be drilled in all three containers with drainage holes only made in the top two. The tap is fitted to the bottom container and the area sealed with the silicone so it does not leak. Of course credit goes to hubby who came to the rescue once again with all the handyman stuff like the drilling and plumbing!

The tumblers are used to support the containers at the same time leaving space for the leachate and vermicompost. The assembled worm farm stands on two bricks which keeps the tap accessible. Place it in a sheltered spot out of the sun.

To make their bedding place a thick layer of shredded newspaper in the top bin followed by some soil. Scatter a handful of kitchen scraps over the soil. Help prevent the worms from drying out by covering them with a layer of moistened shredded newspaper.

What do the worms eat?

In order for them to produce their super compost, creating a suitable diet for them is important. Fortunately earthworms are not too fussy and will happily consume veggie peelings, egg shells, coffee grinds, paper and cardboard (wet and shredded). They are able to consume their weight in food each day. It is therefore not necessary to feed them every day but only once they have finished the previous serving of scraps. Remove any waste if it has turned sour – which you’ll be able to smell. This will help in keeping them happy in their environment.

There is some foodstuff you should avoid feeding them. The red wigglers do not like any citrus, pineapple, dairy or meat. They are not fond of onions and garlic either. If you are going to add grass clippings, ensure that it is organic (no pesticides used) and that it has dried out a bit. Only add it in very small quantities in order not to create too much heat for the worms.

If you have a wormery or have been inspired by this article to make one, please feel free to share your experience in the comments below.

With spring just around the corner and a major spring planting on the cards, I’ll let my wormery worms work their magic in creating some super compost for the coming season.

It’s tea time – Teas that can benefit your garden
For centuries tea has been drunk for enjoyment, for comfort, for convalescence …
A No-Lawn Garden Makeover
The concept of a no-lawn garden is an idea that has been …
Cape Gooseberry Jam
This is an easy-to-make jam with a delicious sweetish-tart flavour. These little …
Lemon and Yogurt Cake
Winter in the Cape is lemon time. We are in the midst …