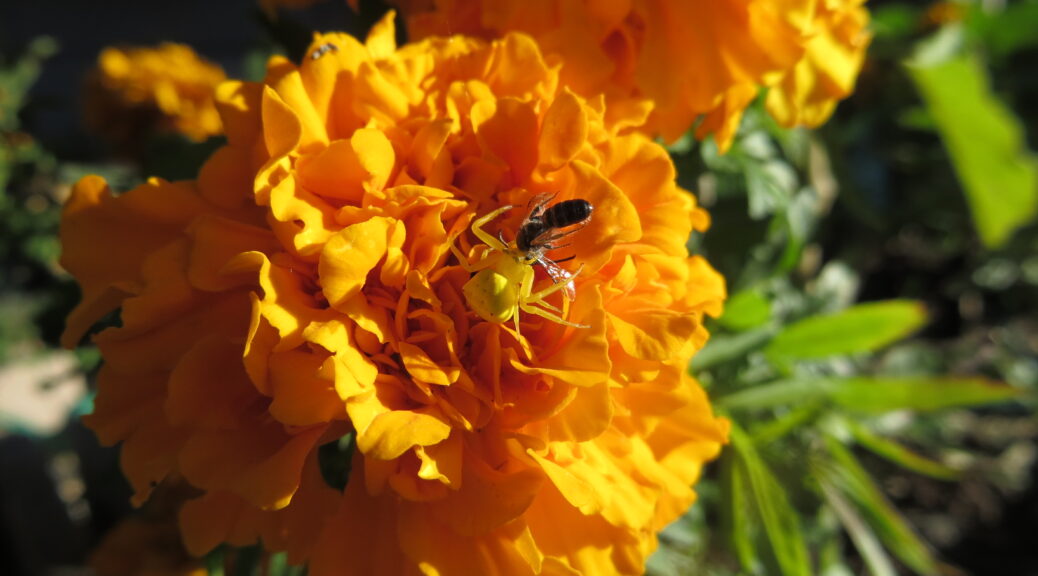 Spideroo, Spidora or “That Spider” – whichever name they go by, love them or hate them, one thing is sure: spiders are beneficial to have in the garden. Spiders help with the control of insects like mozzies, flies and some larger bugs like crickets. I welcome spiders in my garden and find it quite fascinating to observe them.

In our household spiders all have names. Rain spiders all go by the name of Ringo. Officially they are called Palystes superciliosus which sounds a bit like a spell from Hogwarts. Just the thing that some of you may wish you had if you came across one of these hairy, long-legged arachnids in the garden!

They are actually quite harmless. Their bodies are usually no more than 3.5cm in length but it is their 10cm leg span that makes them look a bit scary.

Rain spiders are sometimes found indoors before a rainy spell which may be how they earned this name. Usually my spider evacuation kit consists of a drinking glass and a small square of cardboard. I use this to relocate any spider found in the house back to the garden.

When I hear my husband yell from the other end of the house, “Natalie! There’s a Ringo in the lounge!”, then I know the spider evacuation kit needed is going to have to be a large Tupperware bowl and lid. It is usually me up on the chair trying to get the spider into the bowl while hubby supervises from a safe distance.

All Ringos are safely returned to the garden. I can just imagine an account of their experience. “You know I was captured by a giant and whisked away in a UFO which transported me to this world far away.”

Rain spiders are hunters meaning they do not catch their prey in a web. This makes sense when you consider their diet consists of crickets, cockroaches and even geckos.

Female Rain spiders construct a nest for their eggs which is made of dried leaves and twigs held together in a silk net. The egg sac is usually suspended between plant leaves and branches. She will guard it fiercely until her spiderlings have hatched and emerged from the nest. Interestingly it takes her about three to five hours to build the egg sac. You may spot these in the garden during the summer months so do approach them with caution as Mrs Ringo will nip you if you get too close.

Meet Gustav. Gustav is an orb-weaving spider called Araneus. sp (aka hairy field spider). He’s nocturnal and spends his days sleeping with his legs pulled into a tiny ball tucked away safely from sight.

He can be observed spinning a new web after sunset and then patiently waiting, hanging with his head pointing downwards, for something to fly into his web. Hairy field spiders’ prey consists of moths, mosquitoes and other flying insects.

Because they dismantle their webs at dawn, one may not even be aware that a Gustav was there during the night. So if you do go out on a slug or snail hunt late one evening it is best to be on the lookout for these spiders or you could walk head first into a web. And we all know that would not be a fun experience for you nor the spider!

These cute little guys are Salticidae spiders. They have really good eyesight, sporting four pairs of eyes. The pair of eyes centered in the front is particularly large and gives them a very curious look. My photo is only a top view but you can follow the link to see some really stunning pictures of Salticidae.

Jumping spiders hunt in the day by jumping on their prey. Although they don’t have long legs they can launch themselves a distance of several times their body’s length. They do this using a method whereby they alter the pressure of their body fluids thus allowing them to jump. These spiders don’t spin webs but do use silk as a safety harness when launching an attack.

Wolfie the wolf spider (Lycosidae) is another of the free-roaming spiders I’ve spotted in my garden.

You may have already spotted one of these in your garden. Ever seen a spider running with a little white egg sac attached to its abdomen? Well that would have been Mrs Wolfie protecting her unborn babies. Once her little ones hatch she’ll piggy back them around for a while until they are old enough to go off and find food on their own.

Wolf spiders are ground dwellers, living under leaves, plant matter and even in the lawn. They are beneficial to the garden because they too eat a number of insects including small grasshoppers.

The spiders are not invincible. They need to watch their backs too. There is a parasitoid wasp which is an enemy of the wolf spider. The wasp will paralyse the spider and, after dragging it to its nest, lays an egg in the spider which becomes the food for the wasp larva.

The little colourful crab spiders (Thomisidae) are my favourites. Pinky is one such spider that has been living on the flowers in a lavender bush in my veggie garden for a while now.

These little spiders are masters at ambushing their prey simply because camouflage is their strong point. When Pinky first arrived on the lavender bush he was white in colour. Over time I noticed that he had turned pink (hence his name) and had blended in as best he could.

The little crab spider probably appears as part of the flower to any unsuspecting insect that ventures too close. Because of this, these spiders unfortunately do end up catching quite a few pollinators like bees as well as other bugs. Their strong front legs and potent venom enable them to catch insects that are bigger than they are.

I was fortunate to see a lot of tiny crab spiders hatch on a sweet potato plant in my garden this year. Mommy spider was on guard as the multitude of little spiderlings emerged and went off into the world. I noticed a jumping spider on a leaf nearby, probably hoping to catch a few spider snacks. The babies quickly dispersed, many being carried on their silk threads by the breeze.

If I think that all these spiders help in keeping the population of bad bugs down in my garden, then they are most welcome to stay.

Are you a fan of spiders? I’d love to hear about the spiders you’ve seen in your garden. Feel free to add your comments below.

Until next time, happy spider spotting.

3 thoughts on “Spiders in my Garden”