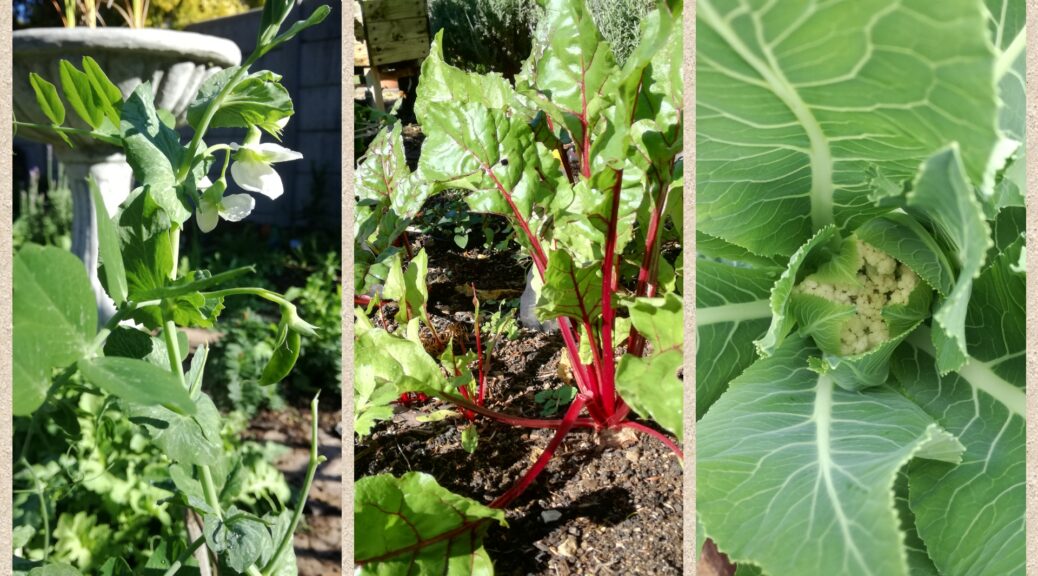 One can be forgiven for thinking that nothing grows in the veggie garden in winter. Winter is after all a time of hibernation and dormancy for many creatures and plants. But actually there are quite a number of cool season veg that can be grown now. I’ll also share some tips regarding which pests to be on the look out for at this time of the year.

Being in the Western Cape in South Africa has its climatic advantages. My garden does not suffer the wrath of frost like those in many other regions in the country do. It is in a winter rainfall area and is not buried under snow in winter. Daytime temperatures average about 17 degrees Centigrade with nights dipping to around 6 degrees.

These conditions are therefore suitable to growing all sorts of Brassicas and Legumes which prefer the colder weather. I’ve listed some examples in the table below. As you can see there is quite a selection from which to choose.

This is the first season that I’m growing cauliflower. I thought it best to grow something that both hubby and I would eat so that is why kale and Brussels sprouts didn’t make it onto the list. The variety I’m trying is called Wallaby.

Growing cauliflowers is a slow process and I have found that a really good dose of patience is required. The first curd (the edible white flower) only made its appearance after four months. I felt so excited to see the little white head peeping at me through the leaves! Just today I noticed that a second plant has also started forming a little curd. Yay!

I started another batch of seedlings five weeks ago and as you can see in the below image, they are still quite tiny. These are growing in a seedling mix in the green house and I’ll transplant them into the garden once they have a few more leaves.

Although cauliflower varieties include green, orange and even purple ones, the classic white cauliflower is susceptible to discolouration by the sun. In order for the head to remain white it needs to be shaded from sunlight. A process known as blanching is simply done by securing the leaves around the curd to keep it shaded. I use a clothes peg to keep the leaves in place.

I’m not having much luck with my radishes though. They are really so easy to grow but for some reason this year the aphids are attacking them when they are barely two leaves high. On top of that the baby snails seem to have joined ranks with the aphids and as a result the little seedlings hardly stand a chance.

Anyway, I still have some seeds left so I’ll give it another go. Hold thumbs for a better result and hopefully soon I’ll be able to enjoy some radish in my salads.

The Pak Choi on the other hand, grew well. The crunchy leaves are a delicious addition to a stir fry although I do prefer them in a green salad. I guess by now you’ve realised I am a big fan of salads.

The plants have bolted already but I’m letting them go to seed so that I can plant another crop. The flowers provide a food source for bees and other beneficial insects, such as hoverflies, in winter when there are not as many flowers available to them.

My Selection of Legumes

Not only are broad beans easy to grow, the beans they produce are delicious and packed with protein and other nutrients. Vegetable protein is an important component of a meat free diet.

The yield from the Long Pod Aquadulce variety was pretty good last season so I’ve planted them again this year. They don’t have tendrils therefore need to be tied to a stake to keep their stems from snapping in any stormy winter weather. My beans are growing in homemade bamboo teepees and I just secure the stems with plant ties as they grow taller.

Broad beans also go by the name fava or faba beans. Their distinctively patterned flowers of white and dark brown are self pollinating, although bees are attracted to the flowers and may help in the pollination process. The bean pods grow to about 15 cm in length usually containing about four or five beans each.

Mangetout are those deliciously crunchy flat pea pods that are so versatile and healthy. The name is a French word meaning to eat everything – the peas and the pod. They are so nice to snack on that sometimes I munch them while I’m busy in the garden and they don’t make it to the kitchen. Mangetout are great in a stir fry or served as crudités, a healthy alternative to chips and dip.

What else is growing?

In addition to the Brassicas and Legumes I’m growing baby spinach, beetroot and spring onions. Herbs like parsley, coriander and rocket are also happily growing in my winter veg garden.

I’m hopeful that the crop will supply enough beetroot to pickle for later in the year. Have you tried roast beetroot with garlic and feta? That is one of my favourites and for that reason alone I make sure there is enough space in the garden for my beloved beetroots.

The growing process has not been without its challenges. There was an attack of aphids which ruined part of my first planting of cauliflowers. My plants have also had to contend with cabbage white butterfly larvae and more recently, cabbage loopers.

I’m not one for spraying poisons and I try to keep my garden as organic as possible. Apart from picking the caterpillars off by hand, birds help with looper control and parasitoid wasps such as the Cotesia glomerata are beneficial to keeping the cabbage white population numbers down.

It is best to keep inspecting your plants and get rid of any moth or butterfly eggs before they hatch although this is obviously not always possible. As a last resort I’d reach for a biological larvicide which only targets the caterpillars and not the beneficial insects.

What else is munching my plants?

A lot of the munching activity takes place at night. I guess if any neighbours saw me, cell phone torch in hand, scratching around in my plants at night, they may think I’ve gone a bit loopy. This is actually the best time to go hunting for those snails and slugs that can chomp their way through your spinach and parsley in record time.

There are some things one can do to deter these slimy critters. Crushed egg shells placed around the plants usually help. Beer is another way to lure them away from the veggies. Half fill a few yogurt containers with some beer and sink them into the soil. The idea is that the snails head for these ‘pubs’ and drown in the beer.

If you have ever found a seedling that has been broken off just above the ground be on the look out for cutworms. Cutworms are the larvae of certain types of moths and spend the day hiding under the soil or plant debris. Best to squish them when found.

I have previously tried using toilet rolls to make cardboard collars for my seedlings, but although it may have deterred cutworms, the snails hid in them instead. The moths lay their eggs on dead leaves and plant matter so keeping the veggie garden clear of debris will help in preventing these larvae from destroying your crops.

These sap sucking little creatures can cause so much damage to young shoots and leaves. Natural predators of these pests include ladybirds, lacewings and hoverfly larvae. If I see one or two aphids on a plant, then I just pick them off, however, there are organic insecticides available on the market that can be used for a bad infestation.

So as you can see there are plenty of reasons to be outside keeping busy in the garden in winter. Perhaps the thought of growing your own veg for those hearty winter soups and casseroles will inspire you to grab your jacket and scarf and head for the veggie patch.

Until next time, happy gardening!