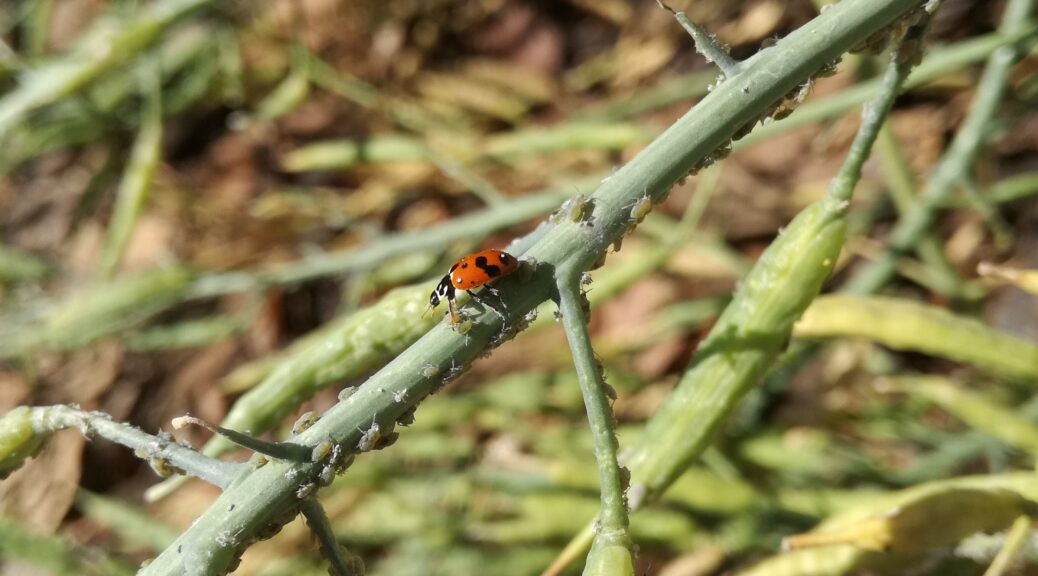 My heart just sinks when I see aphids on my plants. I am sure this is the case with most gardeners. These little sap sucking insects can wreak havoc in the garden especially in spring time when there are so many new shoots and succulent leaves to devour. Remember though, nature is all about balance so at the other end of this see saw is the little ladybird. A hero in my eyes without a doubt.

What is an aphid?

An aphid is a small, soft-bodied insect that sustains itself by sucking the sap of plants. They are usually only 2 – 4 mm long but these tiny insects live in colonies and together cause a lot of damage to crops and ornamentals.

Aphids come in a variety of colours. I have seen green, black and grey ones in my garden but they can also be yellow, white or a reddish pink. Actually these tiny members of the Aphidoidea superfamily are quite fascinating in their own right.

Eggs are usually laid in autumn to overwinter. When these hatch in the spring it is mostly to female aphids. Reproduction then takes place without males. According to Wikipedia the fancy name for this is parthenogenesis. Quite a mouthful but it simply means the female’s eggs need not be fertilised for the baby aphids to develop. The eggs hatch in the mother and the babies are born alive shortly after hatching. Did you know aphids gave live birth? That was news to me. Early on in the season these babies are also usually female and are known as nymphs.

I was really surprised to read that because of parthenogenesis these nymphs can also be born pregnant! Imagine that. No wonder they multiply so quickly.

They literally suck the life juice from the plants causing untold damage to plants, crops and veggies if left unchecked. The aphids have sharp mouthparts called stylets which they use to suck the sap from the leaves and stems. New growth can wither and plants can become misshapen. Aphids can also spread viruses among plants. The sticky substance aphids secrete is called honeydew. In addition to attracting ants, the honeydew is often covered in a sooty mould which can be quite unsightly on ornamental plants.

Aphids are able to adapt to changes in conditions and seasons. This may be if they come under attack from any of their natural predators. Or when the plant they are on is no longer healthy and juicy enough for them to feed off or just due to overcrowding. The stressed aphids release a chemical substance or pheromone which alerts the other aphids to the danger. This can actually lead to the aphids having winged babies which can fly away in search of a better and safer host plant.

One of the most famous natural predators of aphids is the ladybird. Ladybirds, or ladybugs as they are called in North America, are members of the coccinellidae family of beetles. These little beetles are well loved because of their big appetites for aphids and are therefore a welcome sight in a garden.

It is interesting to note that not all ladybird species are friendlies. There a few that are considered pests such as the invasive harlequin ladybird but more on that later. For now we’ll focus on the good guys.

Some pak choi plants that I kept to go to seed had been infested with aphids. I was about to pull them out to get rid of the aphids when I noticed a number of ladybirds. I don’t often get ladybirds in my garden. Perhaps only one or two on the odd occasion. So when I saw that there were quite a few around I became curious to see what was happening.

These little eating machines were working their way through the aphids so I let them be. I didn’t know at the time but have since learned that adult ladybirds can eat around fifty aphids a day. With all the aphids on the pak choi they stuck around for a while.

In a few days I saw what I thought must be a ladybird larva. And then another and another. This was exciting. I had my own ladybird nursery right here in my veggie garden. Ladybird young are called larvae and are pretty peculiar looking. They are usually black with orange markings, have six legs and an elongated, spiky-looking body. They don’t look anything like the adult ladybirds. Ladybird larvae have voracious appetites for aphids and I can understand why they need to moult a few times before they begin the pupa phase of their development.

A few weeks later I noticed the larvae had changed into pupae. There were also hardly any aphids left. This was great and not a problem for the pupae since they do not eat during this phase.

The metamorphosis was completed once the adult ladybirds emerged from the pupae after about seven to ten days. And so with the aphids all eaten the new generation of ladybirds went off in search of their next feast.

Some other interesting facts about ladybirds

When there are not as many aphids available to eat, ladybirds will be able to survive on other garden pest such as thrips, mites and other soft-bodied insects.

Ladybirds have a backup plan in case the supply of aphids is insufficient for their larvae. They lay some unfertilised eggs among the fertilised ones as an additional food source for their young.

The Asian harlequin ladybird (harmonia axyridis) is an invasive species in South Africa as well as in many other parts of the world. Although they are great aphid eaters they unfortunately also eat our indigenous ladybirds. The harlequin can be identified by an ‘M’ pattern on its pronotum – the section between its head and wing cases.

Not all ladybirds have spots. Some have stripes like the Cheilomenes propinqua. I was lucky to spot one of these beauties in my garden.

So if you do see ladybirds in your garden keep them safe by not using any pesticides and in turn they will help you by keeping the aphids under control.

I’ll leave you with this little ladybird quote I found on The Quote Garden’s website. Until next time – happy gardening.

How brave the ladybug must be!

Each drop of rain as big as she.

Can you imagine what you’d do,

If rain drops fell as big as you?

2 thoughts on “Attention Ladybirds! The Aphids are this way”