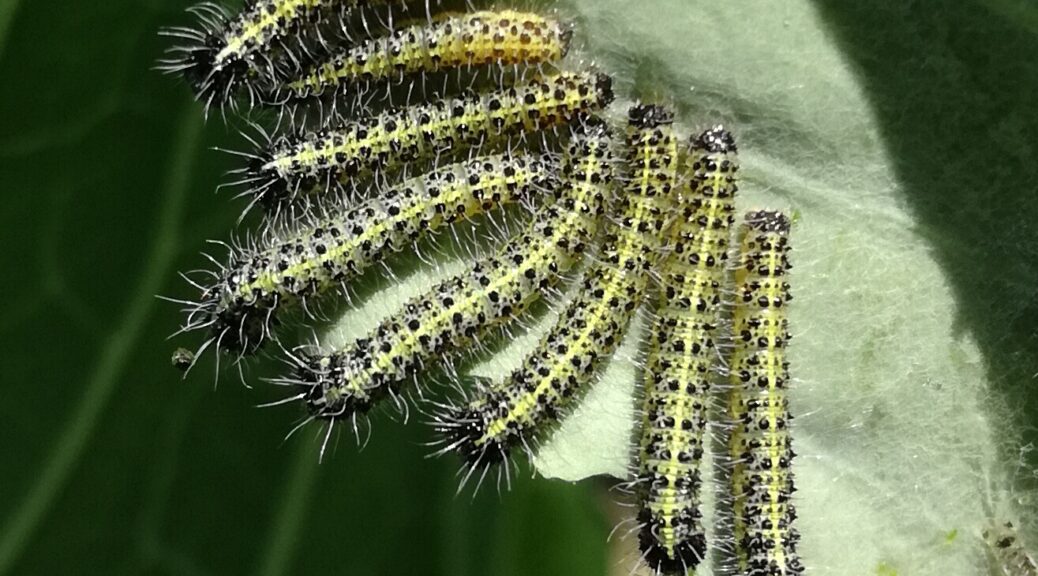 Have you ever had that sinking feeling of seeing your darling plant babies being eaten by an army of caterpillars? It is enough to send one into a panic. It’s an emotional tug of war between welcoming butterflies into my garden and not wanting my plants eaten by caterpillars. Surely Mother Nature must have a plan to prevent the world from being overrun by these ravenous little creatures.

In April my curiosity got the better of me so I left some of the little yellow eggs to hatch. This is an account of what the worms were doing on my cauliflower.

This pretty white butterfly is often spotted fluttering around gardens, especially those growing any of the Brassica group of veggies – Cabbage, Kale and Cauliflower. The Cabbage white butterfly, or Pieris brassicae as it is formally known, is fairly plain looking. Its white wings, marked with a recognisable black spot, have a slightly green tinge underneath.

The butterfly undergoes a full metamorphosis which means that it undergoes definite physical changes from the egg stage through to the adult stage. In the case of the Cabbage white butterfly the stages are egg, caterpillar or larva, chrysalis and butterfly.

The little eggs are yellow and are laid in clusters on the underside of the leaves of the butterfly’s chosen plant – or shall I say plants because I also found she’d laid eggs on my rocket. This is when planting nasturtiums as a companion plant is a great idea. The Cabbage whites are also very fond of nasturtiums and in this way you can lure the beasties away from your veggies. Anyway, the cluster I selected to keep for this ‘eggsperiment’ as I called it had about 130 eggs. What was I thinking?!

I noticed the eggs turned a grey colour before hatching. This must have been as the tiny larvae prepared themselves for their entrance into the world. The batch of eggs was located on a cauliflower growing in a container on its own. A safe bet to keep my ‘eggsperiment’ isolated and my other plants out of harm’s way – or so I thought.

It’s quite fascinating to note that all the eggs hatch at once. The larvae are mostly yellow in colour with a black head. These little guys were born hungry because soon the holes started appearing in the leaf.

Worms on the Cauliflower

Naturally as a veggie gardener I would like my veggies to grow healthy and strong to produce the best crop they can. A hole here and there in a spinach or lettuce leaf is OK – I don’t eat the holes anyway – but when a foraging party takes over, they can certainly do a lot of damage.

The little larvae feed in a group for the first ten to fourteen days of their lives.

After ten days they were about 1 cm in length. I did a quick census and counted over a hundred caterpillars!

As they grow their onesies get a bit small and they have to moult. Again, they all seem to go through the same processes as a group. I noticed that they’d stopped eating for a day and all lay very still. Sure enough the next day when I checked on them they were all in their new finery with their old skins hanging abandoned on the leaf.

Their markings were now yellow and black with fine white hairs visible on their bodies.

So they could now continue to devour the leaf and devour it they did. As one leaf was eaten, they moved to the next. Eventually they started splitting into smaller groups, each group occupying a new leaf of their own.

At just over two weeks old the caterpillars measured 3 to 4 cm. Another moult and the groups’ size was getting smaller. The caterpillars had reduced my cauliflower plant to a green skeleton of leaf stalks.

In the hope that they would remain on the one plant, I carefully selected some leaves from my other cauliflowers and placed them in the plant pot for the hungry hoard of worms.

It helped to keep some from wandering off but the majority of them started migrating to my rocket and Chinese cabbage. I really had to watch where I was walking because the garden was crawling with caterpillars. I relocated the ones from the rocket back to the cauliflower but they weren’t interested in staying. In the end they too made their way to their new favourite food – the Chinese cabbages.

It was surprising to see that the larvae could change their diet without a problem. I remember having silkworms years ago and had always understood that once the worms had eaten a certain type of leaf eg. mulberry or lettuce, one couldn’t change it or they would die. I had just assumed this was true for Cabbage white butterfly larvae too. So I was pretty surprised to find the worms feasting away from the cauliflower leaves. Not sure if the fact that rocket and Chinese cabbage being part of the Brassica family has any bearing on this – maybe.

By now they were nearly three weeks old and about 5 cm long. Each worm was on their own and soon these leaves were reduced to stalks too. The amount of worm poop was mind blowing. I guess the poop is one positive of this whole exercise since it is fertiliser for the soil.

On the road again

I noticed the worms were on the move again. I kept bringing them back to the Chinese cabbage leaves. Actually I must have been frustrating the poor things because I read later that after about four weeks they start looking for a suitable place to begin the next phase of their metamorphosis – the chrysalis stage.

Some of the worms puzzled me – they didn’t change into a chrysalis. Instead they appeared to be on top of a rather uneven lumpy silk ‘mattress’.

As it turned out this is how nature’s plan in population control came together. These poor unfortunate caterpillars had been used as hosts for the larvae of a parasitoid wasp called Cotesia glomerata.

The wasp which is only about 5 – 7 mm in length, lays its eggs in the Cabbage white butterfly larvae when they are much smaller. These larvae grow in their host until it is time for the Cabbage white’s larvae to pupate. The Cotesia glomerata larvae hatch, sadly killing the caterpillars, and spin tiny yellow silk cocoons for themselves.

After two weeks the adult wasps emerged from their cocoons.

The butterfly emerged from the chrysalis after four to five weeks. It sat quite still for a number of hours after emerging which gave me an opportunity to get a good close up look at it. That is when I saw it has spotty green eyes!

I wondered which of the garden birds would help control the worm population. The Cape wagtail and olive thrush usually like worms, however, neither of them took any notice of these caterpillars. As it turns out, birds are not particularly fond of the Cabbage white butterfly larvae due to their taste. Their diet of Brassica leaves gives them a mustardy flavour which deters the birds.

So to avoid serving any of your plants as larvae lunch regular inspection of the leaves is highly recommended in order to remove any eggs before they hatch.

Although I could only find the one butterfly which had survived out of the hundred-odd caterpillars I’m sure that there won’t be a shortage of these Cabbage whites in my garden. The nasturtiums have been hosting a number of other batches of larvae and there have been a few of their chrysalises that I’ve spotted in the vicinity. But at least for now I don’t have any caterpillars on my cauliflowers!

Until next time – happy gardening and watch out for those caterpillars!

2 thoughts on “What are those worms doing on my Cauliflower?”