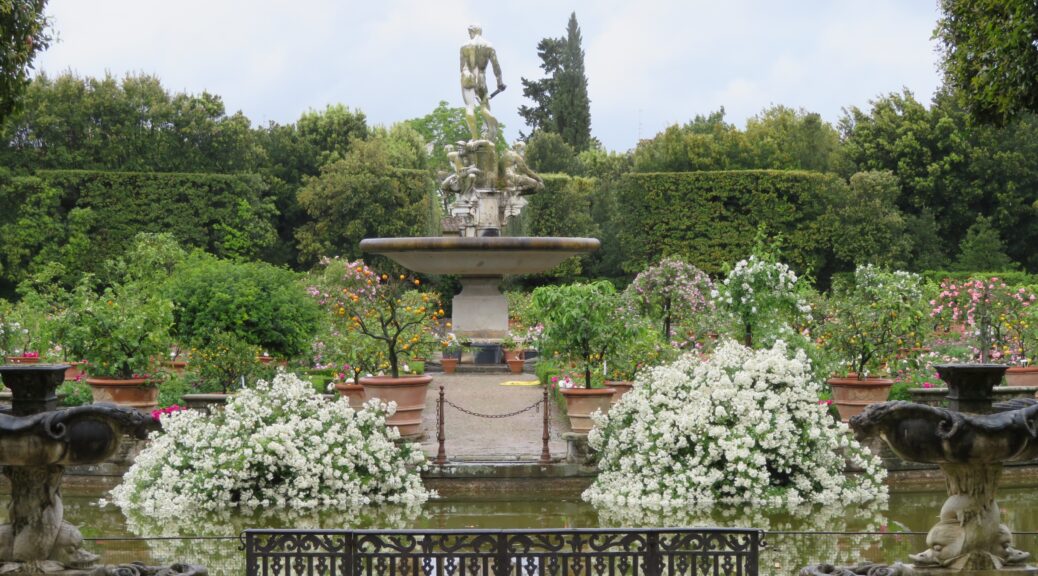 Any visit to Florence in Tuscany should not be without a visit to their famous gardens. Designed to bring pleasure to the visitor these magnificent gardens aim to inspire and delight the senses.  Join me as I explore Boboli, Bardini and Giardino delle rose.

It was while we were busy planning our holiday to Tuscany in May 2019 that I happened to come across a programme about Italian gardens on Netflix. It was a BBC programme hosted by Monty Don, a well known gardening guru, who was visiting famous gardens throughout Italy. I was intrigued and when I saw that his tour included gardens in Florence, I knew I had to add them to my ‘must see’ list.

We only had a few days in this captivating Tuscan city which has a long list of beautiful historic and cultural sights not to be missed. I would have loved to have seen all the gardens but being practical about it I selected three which were within walking distance of each other. At least one of them, Boboli Gardens, had been featured in Monty’s programme and that was good enough for me.

There was a new trend in garden design starting in Italy in the late fifteenth century. Based on the Renaissance style, villa and palace gardens were becoming bigger, better and bolder.

Generally Italian Renaissance gardens were designed using symmetry and structure which demonstrated control over nature in ways to provide interest and beauty. A place for contemplation and to enjoy all a garden could offer in colour, fragrances and sounds as well as admiring the countryside beyond.

The new trend meant that gardens were becoming stages for art and were adorned with fountains, statues and grottoes. The pathways in the gardens were widened and in some cases enlarged to form avenues. These grand gardens were being used as ways to show off wealth and power. Extravagant pageants and events were held to impress visitors, especially foreign dignitaries.

An example of one of these magnificent gardens is the 45 000 m² Giardino di Boboli. The day we visited the gardens it rained, however, that in no way detracted from its beauty.

In 1549 Eleanor of Toledo and her husband Cosimo I de’ Medici, the Grand Duke of Tuscany, bought an unfinished private residence on the slopes of Boboli Hill in Florence. The Medicis were a powerful political and wealthy banking family of the city.

The residence had belonged to Luca Pitti, a wealthy banker and a magistrate of Florence. He unfortunately died before construction was completed. Due to the decline of the Pitti family’s prosperity they were eventually forced to sell.

Extensive renovations were begun, upgrading the building into a palace and plans for a garden on the land directly behind it were drawn up. Although Eleanor and her husband did not live to see the completion of their project, Pitti Palace did eventually become the residence of the ruling families of Tuscany.

Boboli Gardens was to become one of the most important Italian Renaissance gardens. Numerous changes and enlargements were made to the gardens over a period of two centuries until they were opened to the public in 1766 for the first time.

The gardens are characterised by wide gravel walkways, or allées, terraces, fountains, grottoes and over three hundred statues. The Medicis, reknowned for being avid supporters of the arts, commissioned many works by famous sculptors and artists such as Michelangelo, Lorenzi and Brunelleschi.

Many of these works were included in the garden transforming it into an outdoor art gallery. Art exhibitions are still hosted in the gardens today. We saw works from British sculptor, Tony Cragg, on display during our visit.

Two axes dominate the garden’s symmetry. The main axis runs up the hill from the amphitheater directly behind the palace to the Fountain of Neptune. The bronze statue of Neptune, created by Stoldo Lorenzi, stands over marble sea monsters. Interestingly the amphitheater was originally the quarry used to provide the stone for the construction of the palace.

The second axis, known as the Viottolone, is a long, wide avenue of Cypress trees and statues that leads to the Isolotto at the far end of the garden. The Isolotto is an oval island with a moat in an area enclosed by a high bay hedge. There are numerous statues of mythical creatures surrounding the moat with the Fountain of the Ocean by Giambologna taking centre stage.

Although now housing a collection of lemon trees in terracotta pots I remember Monty had mentioned that they used to keep rabbits and chickens on the island.

There are three smaller allées crossing the over 300 m long Cypress Avenue dividing the garden into smaller themed areas. Three of these sections are connected by a winding path where one can take a leisurely walk under the trees.

My experience with grottoes in Italy was limited to the Blue Grotto in Capri. As I stepped inside the Buontalenti Grotto I was very surprised because it was nothing like I’d seen before.

The cool interior of this man made cave looks like it could be from a dream. Elaborate sculptures of volcanic rock, shells and quarts cover the walls. I could imagine the water features used in the grotto in days gone by splashing over these fanciful characters adding to the theater and drama of the garden.

Four of Michelangelo’s statues known as The Slaves were incorporated into the intricate design of the grotto. Although now cement replicas, one still has the impression of them trying to escape their stony bonds. The originals are now housed at the Galleria dell’Accademia.

The Porcelain Museum is located on a hill top within the Boboli Gardens. Visitors can wander through the symmetrical Knights’ Garden of low box hedges brightened by carnations, roses and flowers offering seasonal colour displays.

The Casino del Cavaliere houses the collection of over 2000 pieces of porcelain mainly crafted in Italy. There are also some examples from France, Austria and Germany. The oldest pieces are estimated to be 350 years old.

After about three hours of exploring this immense parkland garden I came away with a feeling of awe. How magnificent it must have been all those years ago to host garden parties in such an impressive setting.

Perhaps after the vastness of Boboli, stepping into Bardini Gardens I felt as if I was being wrapped in a cocoon of green protection.

These gardens were recently restored and opened to the public in 2006. The property consists of three sections each of which were designed in different periods in history allowing one to travel through time as you explore.

I love trees and water and this part of the garden features both of those elements. The woodland garden, planted in the early eighteen hundreds, covers the grounds surrounding Villa Bardini. The Dragon Canal, as it is known, meanders through this lush woodland landscape of calming greens punctuated by large moss covered urns.

Many exotic plants such as Azaleas are included on the plant list and according to the Bardini Garden website, this woodland garden is one of the rare examples of Anglo-Chinese landscaping.

The Italianate Garden lies in the centre of the property on a steep hill. The baroque staircase built by Giulio Mozzi in the late Eighteenth Century dominates this garden. It leads up to the Belvedere from where one can enjoy the panoramic view of the city. All this walking was making us thirsty so we decided to do as the guide book suggested and stopped at the Kaffeehaus on the Belvedere to enjoy something cold while we took in the view.

I had read of the spectacular sight of the wisteria covered walkway that blooms between April and May. In my mind I was picturing the vivid purple flowers framing the views of the city beyond. I was so hoping that we were not too late to see the spectacle but sadly the flowers had come and gone and the walkway remained green. Those who know me know that I am always looking for that silver lining in any situation and even though a bit disappointed, I decided my next visit to Florence will be during April.

The wisteria pergola leads one to the third part of the garden. This section is dedicated to plantings of various fruit trees traditionally grown in Tuscany.

From here we walked just less than a kilometre along Via di Belvedere to our final garden destination.

The views over Florence from this pretty little garden are well worth the climb up the hill to get there. Giardino delle rose, or the Rose Garden, can also be easily accessed from Piazzale Michelangelo.

The Municipality of Florence commissioned Giuseppe Poggi to create the gardens in 1865. The garden boasts about four hundred different rose varieties as well as a number of other plants.

Several sculptures by a Belgian artist, Jean-Michel Folon, were donated to the gardens in 2011. My favourite is the anteater fountain.

My visit to these famous gardens left me longing for more and inspired me to bring a little bit of Italy back to my garden at home. So until next time, arrivederci Italia!

2 thoughts on “A visit to three famous gardens in Florence”